Today we went to meet the Women Working Together group at the Broughton Hub where they meet each week. We had done some work with the group previously and they had expressed interest in taking part in this project when they knew it was linked to a greater understanding of migration to Cheetham Hill, and how the area was successfully developed because of it. 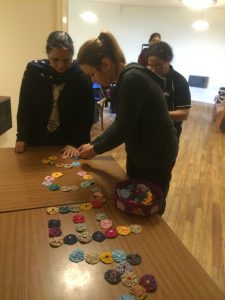 All the women’s families had moved to the UK at some point in the second half of the 20th century due to economic migration. Several of the group were from Faisalabad, the ‘Manchester of Pakistan’ and this fact was intriguing to all of us to explore in the Patterns of Migration Exhibition. We discovered that Faisalabad had a very similar industrial growth and success due to the textiles industry, hence Manchester was seen as a popular destination for many families in the 1950s and 60s. Due to a shortage of skills in the UK at that time, particularly in the textiles industries, people from Pakistan, being in a Commonwealth country, were encouraged to migrate and settle in the UK.

Ibrat Naeem started the group 12 years ago to create a social group for women so that they could develop some new skills and make friends outside the home. She is proud of the history of the group as many of the participants have gone on to training and employment.

We talked to Ibrat, during one of the group’s weekly sewing sessions, about her journey from Pakistan to Cheetham Hill. You can hear about her family’s experience of being in the UK here –

Tell Us What You Think

This site uses Akismet to reduce spam. Learn how your comment data is processed.